Rally now has a Rally Warrant to work for.  This comes after the level 6 title, but requires the dog to have gained a title AT EACH LEVEL. Dogs working 2 levels at a time can sometimes gain the higher one first.  If the show dates then fall so that no more qualifiers at the lower level can be gained, the lower level title would be skipped.  If working 2 levels at once then, it will be necessary to take care to finish the lower level first – which can be awkward if the classes turn out to be in reverse order on the day.

Obedience: Stays at all levels have been suspended.  Initially this is to allow shows to restart after lockdown, but the end of stays has already been voted for.  Discussions on how to incorporate a short stay in each round, or something similar, are taking place before the final rule change is made.

This news isn’t KC, as there’s been none of that in the UK since Crufts.

Jean Tuck's Maddie (Saunderswood Fire Fly of Craygill AWG) and Zac (Tooralie’s Masquerade at Craygill AWP Beg.Ex) have been having a try at tricks with DogTricksUK during the November lockdown, and since.  Having worked their way through Novice, Intermediate, Advanced and Expert levels, they have now achieved Champion status (TDCH).

Although not recognised by our KC, the American and Canadian KCs do recognise it, and their logos are on all the certificates.

The tricks include exercises from agility, breed, obedience, scentwork and rally, as well as more traditional tricks, so there’s something for everyone to get started.

As there were no shows last year, and therefore very little news, it has been decided that there would be no Autumn issue of "Sheltie at Work" in 2020. Subscriptions will be carried forward to 2021, when we hope that dog activities will be back to normality again.

Our Agility Show planned for 1st November 2020 was regretfully cancelled taking into account the KC advice about shows and the fact that the venue does not lend itself for the suitable social distancing required.

Due to the Covid restrictions affecting the use of the village hall, both the training days in November 2020 were also cancelled.

The following have won their second ticket

The following have also won a ticket

With Lian’s two tickets plus one ticket each from Chloe and Roz reported in the last SAW, as well as Hayley winning The Crufts Agility Championships, the Shelties have won eleven tickets this year.

The Kennel Club have announced the Agility Team G.B. squad 2020

Apryl Britton with Never Let Go Of The Five Colors

The following Shelties will be competing at Crufts

Nicola Garrett with Obay One Crazy Dude and

Sue Robinson with Sheltysham Nut Box in Alnmac (Fozzie) was 2nd in Limit at St. Helens Midwesterns Championship Show. Fozzie has had several places working 'A' in Obedience.

Lin Abbott with Keltihope Work of Art was 3rd in Novice at ESSC Limit.

Wendy Ashby with Janetstown Just Joking was 2nd in Beginners at ESSC Limit.

Wendy Clark with Colmae Cazanova was 1st in ‘A’ at ESSC Limit.

Carol Dare with Lavika Mirror Image (Rafa) was 4th in ‘A’ and 1st in ‘B’ at ESSC Limit.

Penny Forster-Cooper with Sheltysham Briar Rose at Alnmac (Katie) was 2nd in ‘A’ at ESSC Limit.

Lesley Lubbi with Amberblaze By A Lady of Layash (Flame) was 6th in Novice at Birmingham & Dist GSD.

Sue Kennedy with Mendipmist Handsome Prince was 2nd in Novice at ESSC Limit.

John Kenny with Sandstar Handsome Lad was 1st in Pre-Beginners at ESSC Limit.

Frances Meredith with Milwyr Diamond Geezer was 1st in Beginners at ESSC Limit.

Sue Robinson with Sheltysham Nut Box in Alnmac (Fozzie) was 4th in ‘A’ at Thurrock, 5th in 'A' at Anglia Acorns, 2nd in 'A' at Sheffield.

Also Sue with Sheltysham Nightsong at Alnmac (So-So) was 4th in ‘B’ at Thurrock. So-So won his last 'A' at Anglia Acorns so will be working 'B' and 'C' next year. So-So got a 3rd in his final 'A' at Sheffield.

Dawn Wood with Lianbray Lotto was 4th in Novice at ESSC limit.

The following Sheltie will be competing at Crufts

Lin Abbott with Keltihope Work of Art (Jed) was 1st in Level 1 and 6th in Level 2 at Winchester City.

Also Vanessa with Sheltysham Medley of Gold RL6.Ex (Jelly Tot) was 5th in Level 6 at Daventry.

The following Shelties will be competing at Crufts

Davina Symes with Lianbray Trice As Nice (Robbie) got his Bronze and Silver Good Citizens at Thames Dog Training Club.

Jean Tuck with Tooralie’s Masquerade at Craygill AW(G) Beg.Ex RL3 Ex (Zac) did his first Level 5 at ScentworkUK. He had to find a least 9 of 12 hidden scented items and managed to find all of them. Thus gaining full marks and a 3rd place and qualifying him to work Level 6. 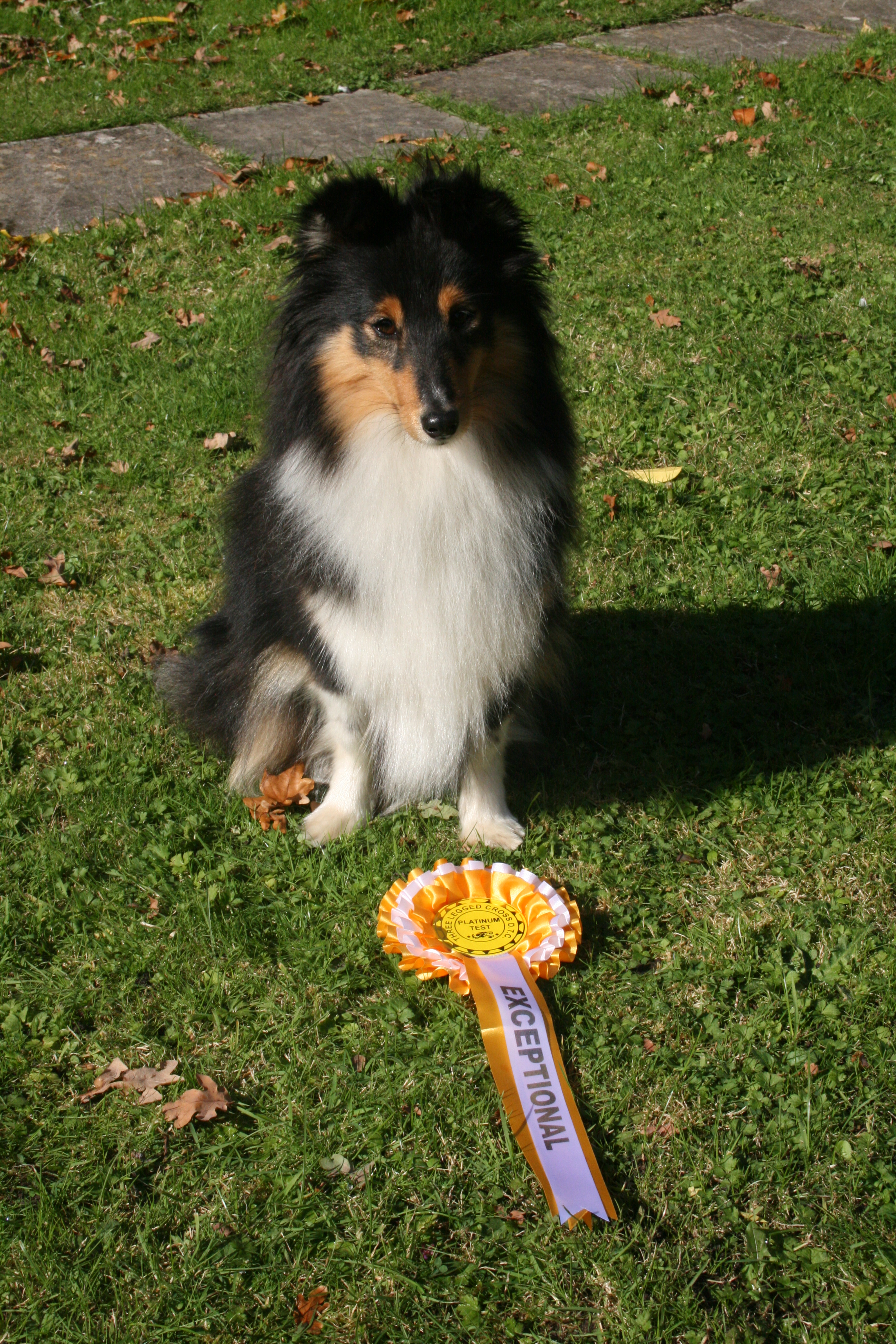 Platinum Test devised by the Three Legged Cross D.T.C. for themselves

Send Away at least 20 yards.

Retrieve placed slipper (to owner sitting in a chair for disabled exercise).

Seek back 20 paces to find either glove or key fob.

Also handlers to command their dog in down position when all dogs are loose.

Stay exercise 2 mins down handler out of sight.

gained 95 points at the above tests.